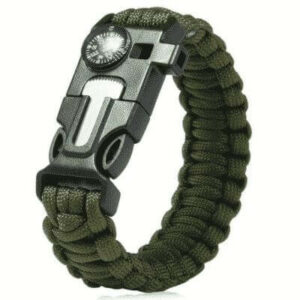 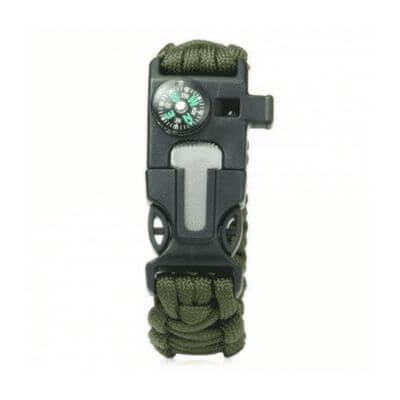 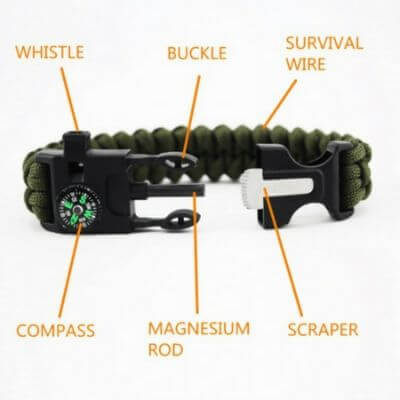 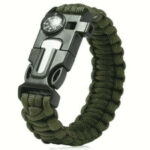 A multi functional survival band which can be employed to help in various ways in all times of crisis with built in fire starters, a compass and a whistle, the paracord bracelet is the perfect addition to a camping trip or hike. It is compact and does not take up much space, it wraps around your wrist making it portable and available at all times. It is sleek and cleverly designed to be robust and sophisticated.

A Multifunction survival band which goes with most wardrobes and can be a huge help in times of crisis. The bracelet unravels 12 Feet of 550 Parachute Cord.

Ans. It is a survival gear with multiple features to serve you in emergency situations. While also doubling up as a fashion accessory.

Q2. What are the Features of this product?

Ans. Paracord Bracelet V 2.0 comes with a whistle, compass and fire starter. Other than this the string can be unwound to make it longer so that can be used for multiple purposes in times of crisis or as a tool for survival

Ans. Hikers and outdoor sports enthusiasts sometimes use “survival belts” made of several feet of paracord which is woven into a compact and wearable form. Such bracelets are meant to be unraveled when one needs rope for whatever purpose— securing cargo, lashing together poles, fixing broken straps or belts, or assisting with water rescues. Young survivalists (Girl Scouts and boy scouts) are also taught the importance of using the paracord as a survival tool. The bracelet is built on this same principle but on a more compact scale.

Ans. Parachute cord (also paracord or 550 cord when referring to type-III paracord) is a lightweight nylon kernmantle rope originally used in the suspension lines of parachutes. This cord is useful for many other tasks and is now used as a general purpose utility cord by both military personnel and civilians.

Q5. Will it not be heavy with all its features?

Ans. No, the paracord bracelet weighs a mere 20 grams and is easy to carry around

The Paracord bracelet is designed to be a style statement and a means of survival in times of trouble. It is jam packed with features and can be unwound to tie, fish, bind together or to tie luggage.

Be the first to review “Paracord Bracelet V 2.0” Cancel reply