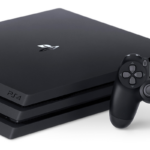 Store your games, apps, screenshots and videos with up to 1TB storage inside the PS4 console – slimmer and lighter than the original PS4 model and available in Jet Black and more colors.

The Best Place to Play:-

The PlayStation 4 is the best place to play with dynamic, connected gaming, powerful graphics and speed, intelligent personalisation, deeply integrated social capabilities, and innovative second-screen features. Combining unparalleled content, immersive gaming experiences, all of your favourite digital entertainment apps, and PlayStation exclusives, the PS4 centres on gamers, enabling them to play when, where and how they want. The PS4 enables the greatest game developers in the world to unlock their creativity and push the boundaries of play through a system that is tuned specifically to their needs.

The PS4 system focuses on the gamer, ensuring that the very best games and the most immersive experiences are possible on the platform. The PS4 system enables the greatest game developers in the world to unlock their creativity and push the boundaries of play through a system that is tuned specifically to their needs. The PS4 system is centred around a powerful custom chip that contains eight x86-64 cores and a state of the art 1.84 TFLOPS graphics processor with 8 GB of ultra-fast GDDR5 unified system memory, easing game creation and increasing the richness of content achievable on the platform. The end result is new games with rich, high-fidelity graphics and deeply immersive experiences.

Engage in endless personal challenges with your community and share your epic triumphs with the press of a button. Simply hit the SHARE button on the controller, scan through the last few minutes of gameplay, tag it and return to the game, the video uploads as you play. The PS4 system also enhances social spectating by enabling you to broadcast your gameplay in real-time.

Remote Play on the PS4 system fully unlocks the PlayStation Vita system’s potential, making it the ultimate companion device. With the PS Vita system, gamers will be able to seamlessly play a range of the PS4 titles on the beautiful 5-inch display over Wi-Fi access points in a local area network. 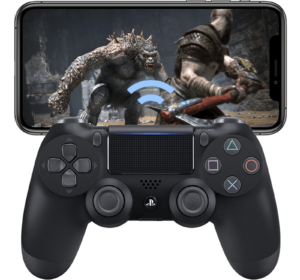 An iconic design that fits perfectly in your hands, intuitive controls that keep you on top of your game and a vibrant array of colours to suit your style. However you like to play, the DUALSHOCK®4 wireless controller has you covered.

Discover the biggest and best movies, TV shows, video streaming services and all the world’s music from your PS4 home screen. 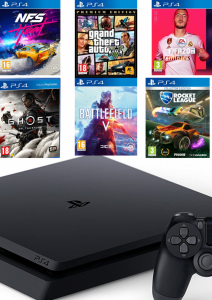 Note: The PlayStation Console comes with a variety of free pre-loaded games. The game combination is subject to variation depending upon the availability.
Click here for expert reviews on Playstation 4.

Q: What comes in the PS4 box at launch?
A: You’ll get a PS4 system with a 500GB hard drive, a DUALSHOCK 4 wireless controller, a micro-USB cable for charging the DUALSHOCK 4 controller, a Mono-headset for voice chat, a power cable (1.5m), and an HDMI cable (2.0m).

Q: What type of hard drive does PS4 use?
A: PS4 is equipped with a 5400 RPM SATA II hard drive. Users can choose to install a new hard drive so long as it complies with these standards, is no thicker than 9.5mm, and is larger than 160GB.

Q: Will users be able to connect an external hard drive to expand storage on PS4?
A: No, this feature is not supported on PS4.

Q: What color variations will you offer at launch?
A: The model color at launch is “Jet Black.”

Q: Can I put my PS4 system in an upright position like the PS3 system?
A: Yes, PS4 can be used in the horizontal or vertical position. In North America, vertical stands for PS4 will be released by partners as officially licensed program products during PS4’s launch window.

Q: How does PS4’s hardware performance advance beyond the PS3 system?
A: PS4 is capable of 10x the processing power of the PS3 system. The system features an optimized design featuring a unified 8GB of high-speed GDDR5 RAM, an eight core X86 CPU, and a powerful graphics processor. Generally speaking, PS4 will enable game developers to build larger, more detailed worlds than they could with the PS3 system. More realistic lighting models, more complex physics and particle effects, more varied and realistic character animations, sharper environment and object textures, higher screen resolutions (up to 1080p), higher frame rates (up to 60 frames per second), larger multiplayer matches and more will be possible thanks to PS4’s next-generation hardware.

Q: What can you say about PS4’s graphics processing unit (GPU)?
A: PS4’s graphics processing unit (GPU) contains a unified array of 18 Compute Units, which collectively generate 1.84 teraflops of processing power that can freely be applied to graphics, simulation tasks, or a mixture of the two. PS4 is also equipped with 8 GB of unified system memory, easing game creation and increasing the richness of content achievable. High-speed GDDR5 is used for this memory, giving the system a total of 176 GB/second of bandwidth and providing a further boost to graphics performance.

Q: Will PS4 support 4K content for video or gaming?
A: Support for high-resolution 4K output for still images and movie content is in consideration, but there are no further details to share at this time. PS4 does not currently support 4K output for games.

Q: Can I use my standard-definition TV with PS4?
A: The resolution of PS4’s HDMI output changes automatically depending on the TV or monitor connected. Of course, PS4 has been designed to deliver games with rich, high-fidelity graphics that are best enjoyed on HD TVs.

Q: Does PS4 support analog video or audio output?
A: No. PS4’s video and audio are transmitted using HDMI, a common digital connector found on most HD TVs. Additionally, PS4 can output 5.1 via DIGITAL OUT (OPTICAL).

Q: Do I need to “reset” my video settings if I change TVs, as on PS3?
A: This process will not be necessary for PS4.