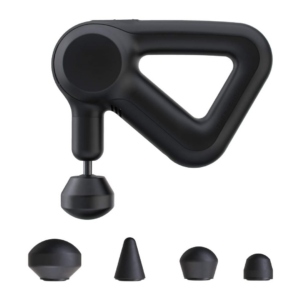 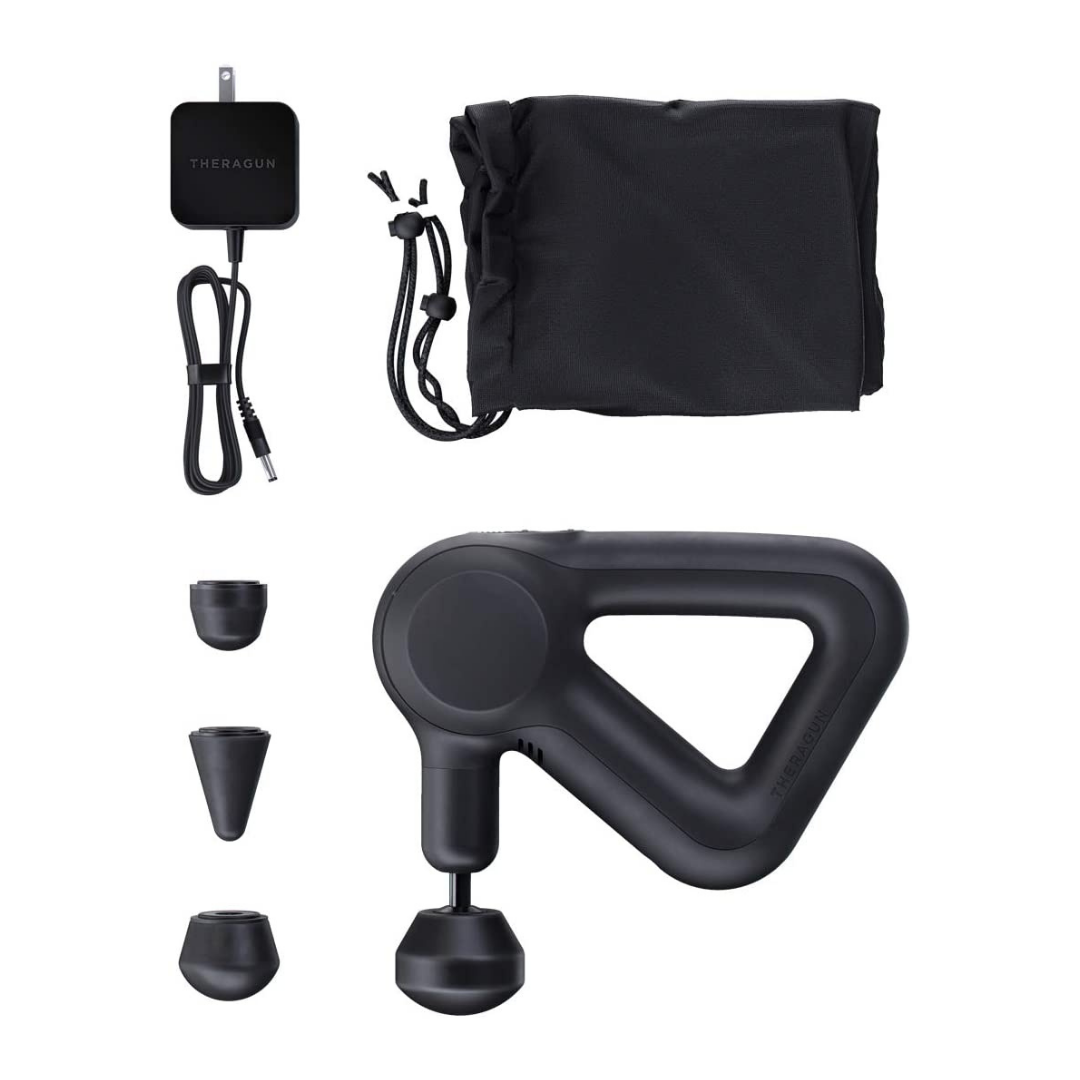 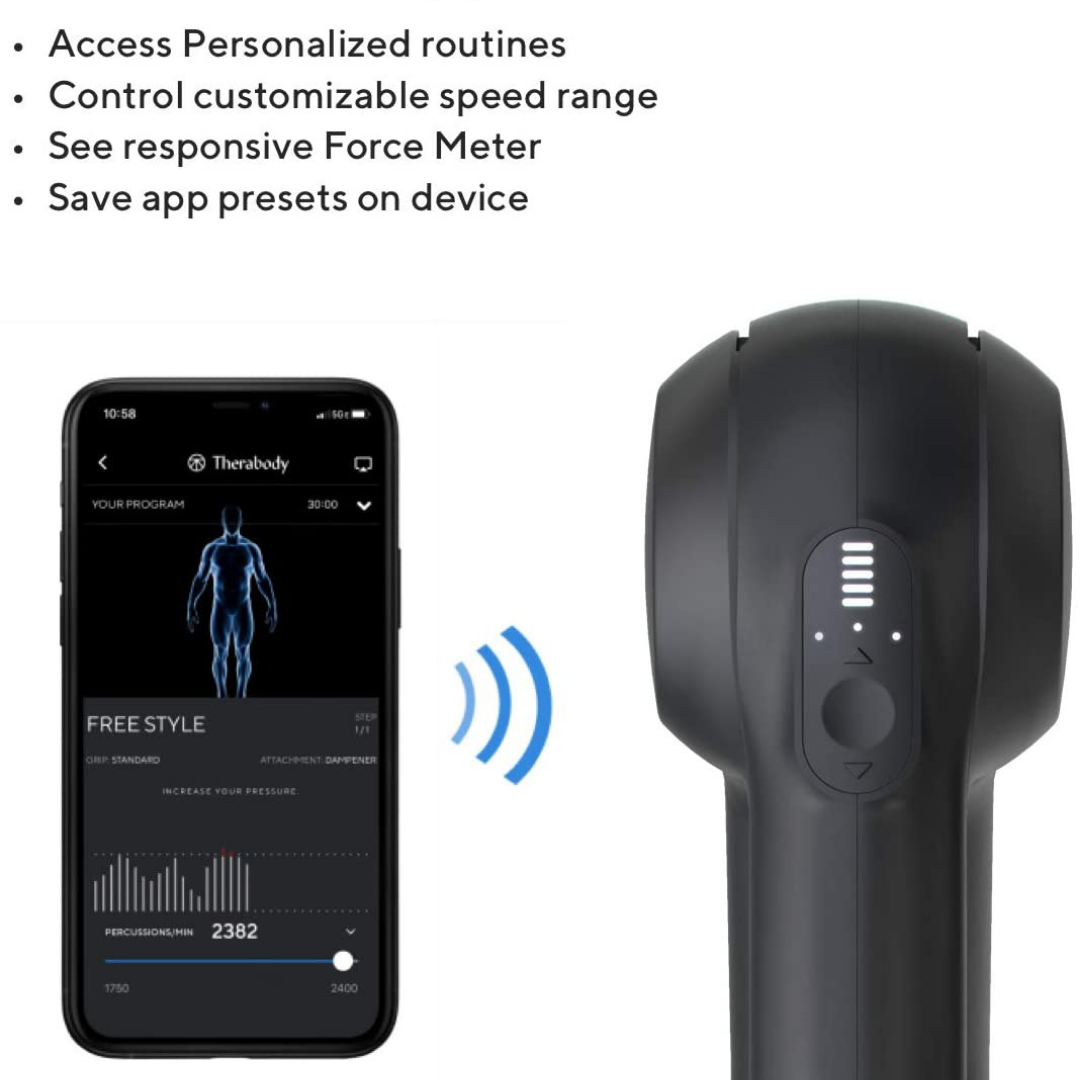 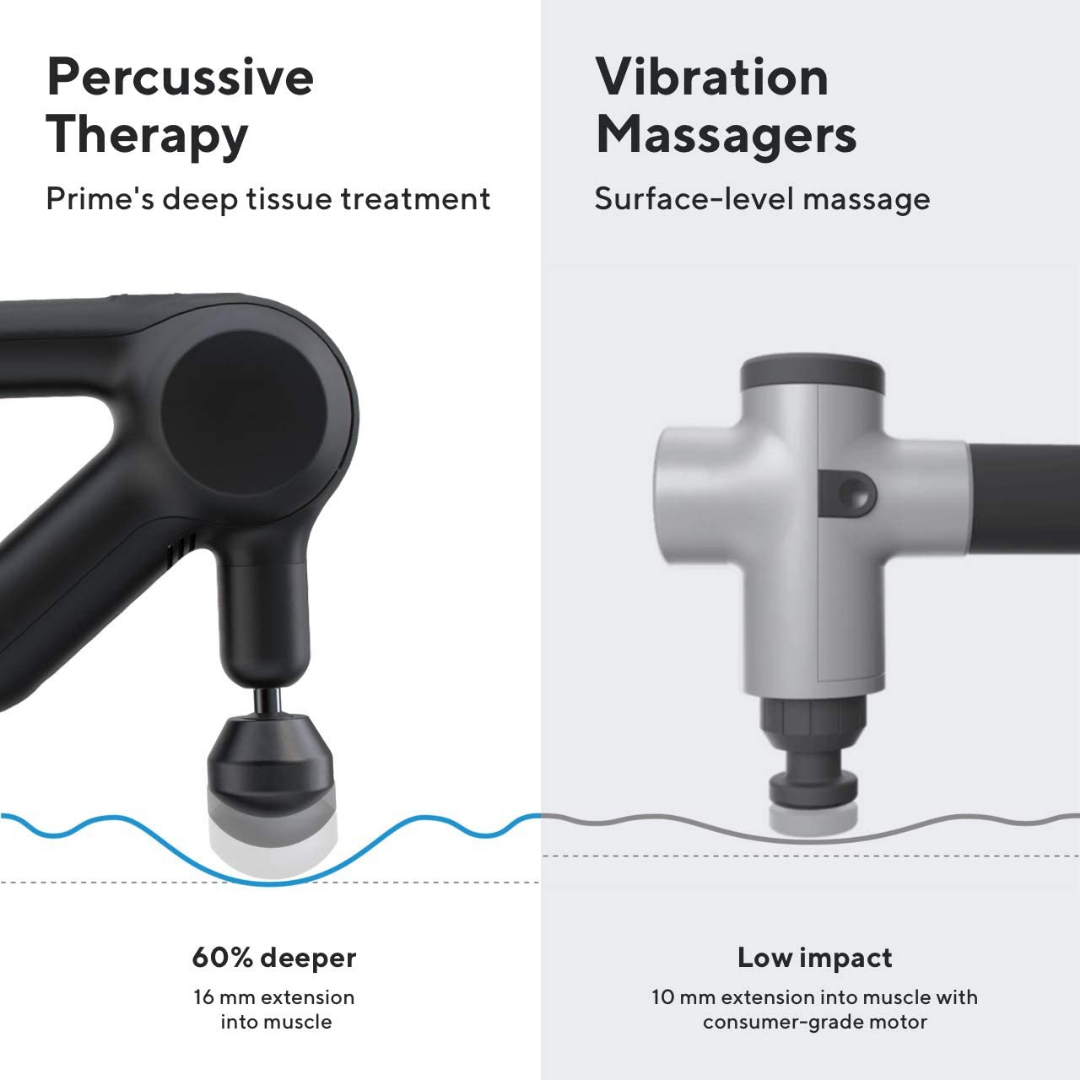 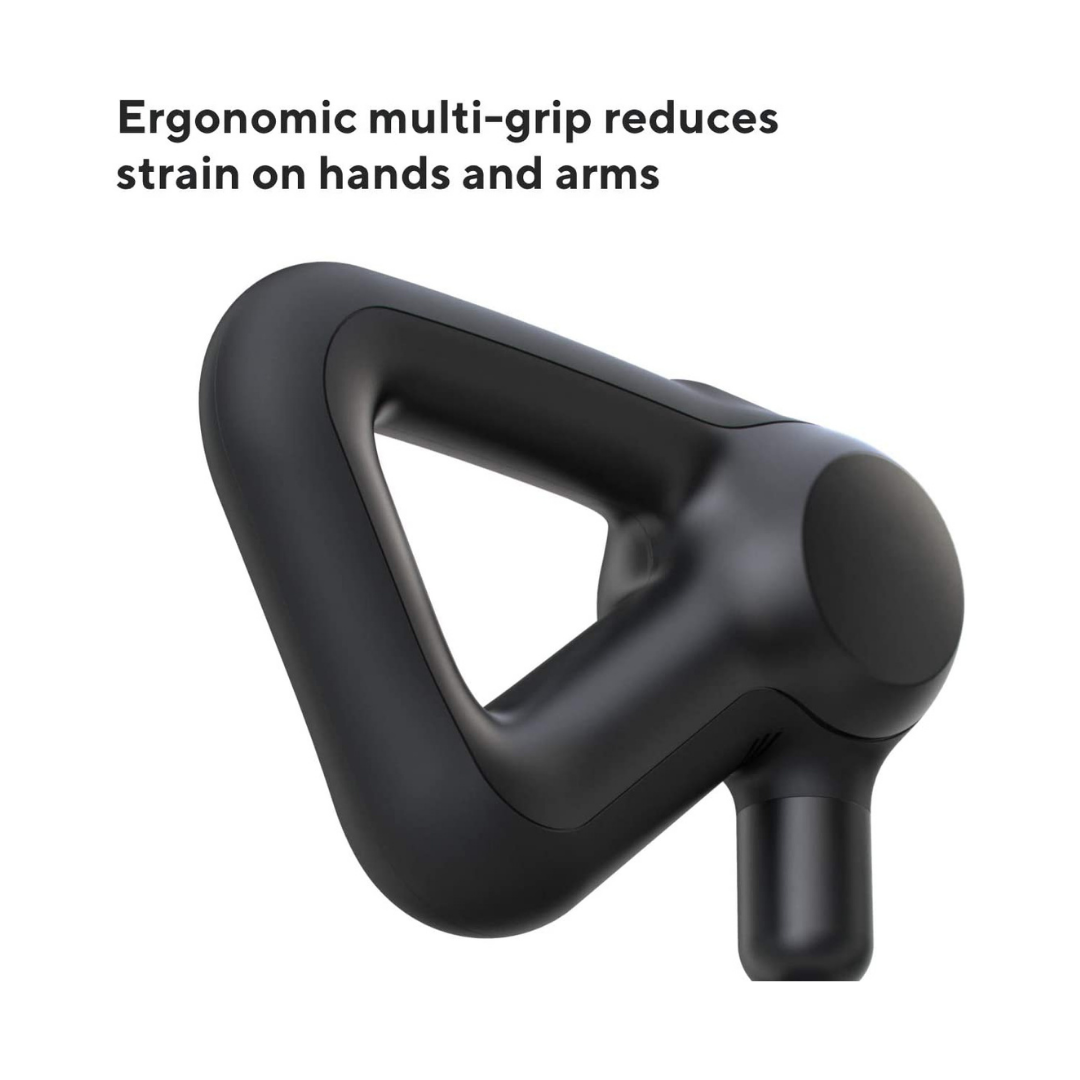 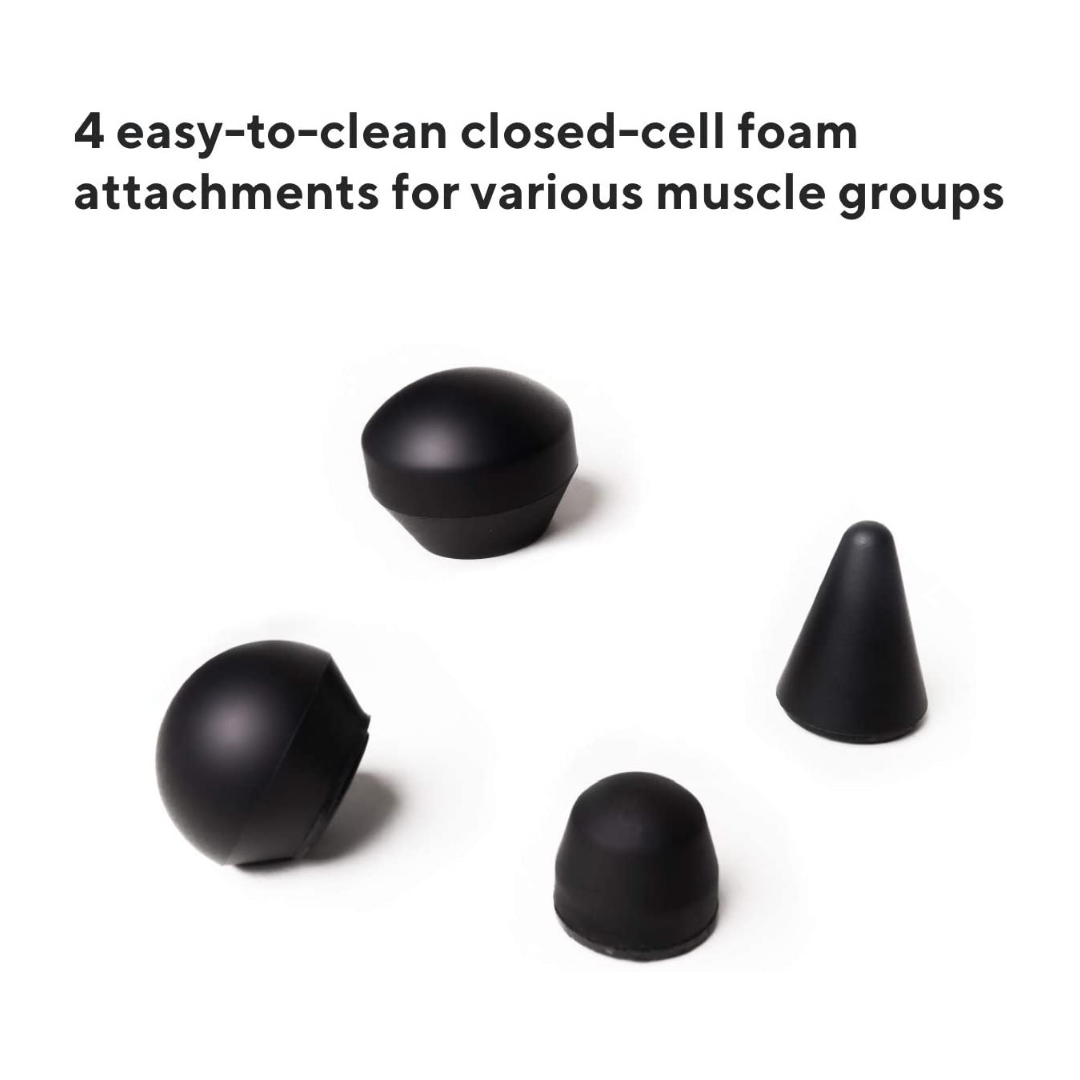 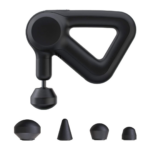 The Theragun Prime is a simplified smart percussive therapy device that prioritizes the essential features you need while maintaining the power and effectiveness of Theragun’s deep muscle treatment. Ease discomfort, soothe tightness and tension, and recover faster in seconds. The Theragun is the world-leading percussive therapy device used by physical therapists, trainers, chiropractors, celebrities, athletes, and over 250 professional sports teams worldwide. Developed by Dr. Jason Wersland, every aspect of the Theragun Prime has been thoughtfully designed for maximum ergonomic comfort and unparalleled durability and treatment.

Depth, speed, and force are key to any deep muscle treatment, but Theragun impacts muscle with a targeted, scientifically calibrated dose for greater therapeutic benefits for the body. All it takes is a quick 30 second sweep to activate the body before a workout or over your shoulders after a long day to release tension and stress.

When our founder Dr. Jason Wersland searched for a natural solution for his pain, the devices he tried didn’t get to the root of his discomfort. 13 versions later, the Prime delivers our 60% deeper amplitude and speed with up to 30 lbs. force without stalling – a powerful, potent dose for greater circulation and tension release.

Theragun Prime is Bluetooth enabled and seamlessly integrated with our new newly updated, fully-personalized app experience, Prime is connected to your life in a more meaningful way than ever. As our Therabody app continues to interact with and learn from your behaviors and preferences, it will suggest customized treatments to support the things you enjoy doing most.

Smart App Integration via Bluetooth®, Customizable Speed Range, App-guided routines can be run on the Prime

Everything to Know About the Theragun Prime Before You Buy

Here’s what I loved the most about the Theragun Prime:

It’s quieter than all of the other models. The Theragun website claims that the Prime is 70% quieter than previous Theragun models, and I believe it. When I used the former Theragun Liv and the Pro G3, I always felt like my brain was rattling around inside my skull. It was so loud it was often too overwhelming to use. The Theragun Prime, on the other hand, does not sound or feel like a power drill. It’s easy to use even around the neck and shoulders, which is a massive plus because that’s always where I need it most.

It’s powerful when you want it to be. The Prime has five speeds you can control with the app or on the gun itself. With speeds up to 2400 PPM, it gets pretty powerful. I typically don’t use the higher speeds because I like a gentler massage, but I like knowing that if I need the power, it’s there.

But it’s not too much for sore muscles. The first three speeds on the Prime are perfect for moderately sore muscles. I wouldn’t use the Theragun on super sore muscles at all — a foam roller is probably a better choice — but some people with a higher pain tolerance can probably do so with no problem.

It has a long battery life. The two-hour battery life lasts me for weeks, because I typically use the Prime for five to 15 minutes, one to three times per week.

It comes with multiple attachments. The Theragun Liv only came with one large ball attachment and one small ball attachment, but the Prime comes with a dampener, ball, cone, and thumb attachment for use on different muscle groups. For example, the dampener is great for sensitive areas like the neck or hips, while the cone can reach trigger points in your back and the arches of your feet.

The Therabody app and integrations are fantastic. If you’re the kind of person who likes data and routines, you’ll love the Therabody app. Within the app, you can create workout recovery routines, mobility routines, and keep track of how often you use the Prime and for how long. The app also makes real-time recommendations based on your usage of the app and the device.