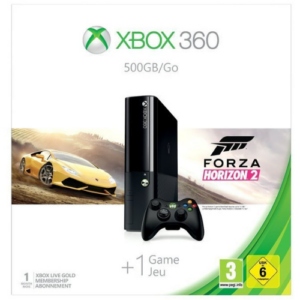 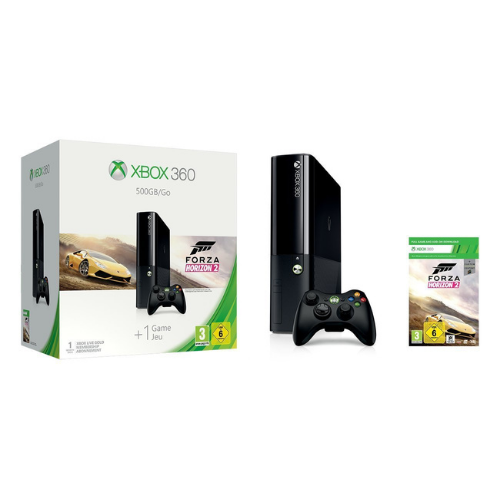 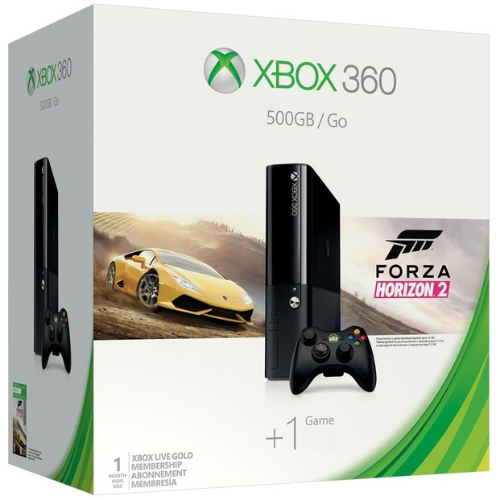 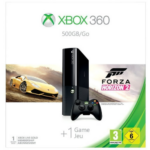 Experience the next level of gaming and indulge in a variety of apps, live TV, and movies with the Xbox 360.
With the Xbox 360, you can experience a new high in gaming. It has a large library of games which allows you to enhance your gaming and entertainment experience.

The Xbox 360 K 500GB, with a leaner machine in an all-new black gloss finish. Wi-Fi is built-in for easier connection to the world of entertainment on Xbox LIVE, where HD movies and TV stream in an instant. It’s ready for the controller-free experiences of Kinect – you don’t just play the game, you are the game. And with the huge hard drive, you’ll have plenty of space to store your favorite games and movies. The Xbox 360S is more games, entertainment, and fun. 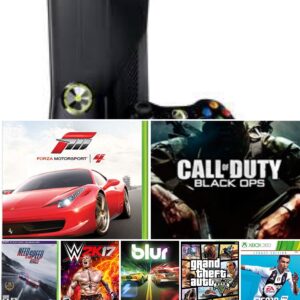 The Xbox 360S is the only console with 802.11n Wi-Fi built-in for a faster and easier connection to Xbox LIVE. Stream HD movies and TV or download games from Xbox LIVE in 1080p and 5.1 surround sound from anywhere in the house. Compatible with b/g/n networks.

Xbox LIVE brings a world of entertainment to you. Download game add-ons like new levels, characters, maps, and songs. Easily jump right into online multiplayer fun and play along with friends around the world. Plus, get your favorite music from Last. FM, connect with friends on Facebook, and post Tweets on Twitter. Imagine controlling a movie with the wave of your hand or video chatting on your TV. Xbox LIVE is your connection to more games, entertainment, and fun.

This award-winning, high-performance wireless controller features a range of up to 30 feet and a battery life of 30 hours on two AA batteries (not included).

Connect more accessories and storage solutions with added USB ports. Now with a total of 5, (3 back/2 fronts) you’ll find more places to plug and play. Plus, in addition to the standard Ethernet port and HDMI output, there’s integrated optical audio out port for an easier connection to the booming sound of your A/V receiver.

Note: The Xbox 360 K Console comes with a variety of free pre-loaded games. The game combination is subject to variation depending upon the availability.

Can someone tell me about installation? What tools are required?

No tools, just pop it in if you have nothing to transfer. Just make sure it’s absolutely all the way in. If you have existing data on your old console (which you probably do if you’re buying this), you’ll need a transfer cable (which works both on and between the older and newer models of the 360 so keep it around for the future), which is sold separately for about $20, so order it at the same time. It’s best to connect the new one via the cable first rather than install the new one, then attach the old one to transfer. I did it the second way and had lots of troubles, so I put the old one back in and did it the first way without trouble. My slot is at the bottom. There’s a very small square in the vent toward the back you push to open. I had a bit of trouble seeing it at first as it looks the same as the vent. Anyway, once you’ve connected the console with the new hard drive, a prompt will come up after a few minutes which will ask you if you want to transfer to or from the console. (if it doesn’t come up, go to settings, that might prompt it) If you hooked the new one up to the transfer cable, then you’ll transfer from the console. After you’ve transferred your information (I had a 320GB that only had about 50GB left on it which took 9 hours to transfer, so allow for enough time. In other words, don’t do it just before you plan on playing a game). Afterward, turn off the console and remove the transfer cord. Open your console’s hard drive port, take out the old hard drive, and put in the new one (be sure it’s all the way in). You’d think you were done, but not so, now you need to transfer your licenses. From the Dashboard, go to Settings, then Account, click License Transfers (some data can’t be used again until you do this). Still not done! Now go to download history, which is just above where you clicked License Transfers, and re-download anything you’ve noticed that you’re missing. I was missing a lot! It took a loooooong time! Happy gaming!

If I use a USB Flash on my Xbox 360, will I get banned from Xbox Live?

No. In fact, we encourage you to use some form of external storage, such as a USB flash drive, for your game data.

How do I add space on a USB flash drive that I've formatted with a customised, Xbox 360 -only folder?

You’ll have to reformat the USB flash drive to make the folder larger, or format the drive to the maximum size of 2 TB.

What other options do I have?

The Xbox 360 500 GB Hard Drive is the best option for media enthusiasts. You’ll have 500 GB of space for games, HD TV and films, Games on Demand, game demos and add-ons, music, and much more. Certain games still require a hard drive for system link play or Xbox Live multiplayer games. For multiplayer gaming, we recommend that you use a hard drive.