Google Pixel 6 Pro comes with a 120 Hz refresh rate 6.70-inch touchscreen display offering a resolution of 1440×3120 pixels at a pixel density of 512 pixels per inch (ppi) and an aspect ratio of 19.5:9. It is powered by a 2.8GHz octa-core Google Tensor processor that features 2 cores clocked at 2.8GHz and 2 cores clocked at 2.25GHz and with 12GB of RAM. The Phone runs Android 12 and is powered by a 5003mAh battery. It supports wireless charging, as well as proprietary fast charging. As far as the cameras are concerned, on the rear packs a triple camera setup featuring a 50-megapixel (f/1.85, 1.2-micron) primary camera; a 12-megapixel (f/2.2, 1.25-micron) camera, and a 48-megapixel (f/3.5, 0.8-micron) camera. The rear camera setup has autofocus. It has a single front camera setup for selfies, featuring a 11.1-megapixel sensor with an f/2.2 aperture and a pixel size of 1.22-micron.

Be the first to review “Google Pixel 6 Pro” Cancel reply 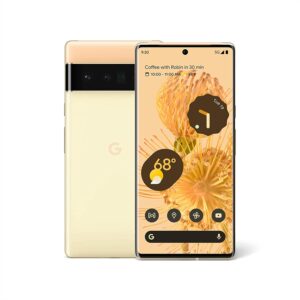