DIFFERENCE BETWEEN STUN GUNS AND TASERS

DIFFERENCE BETWEEN STUN GUNS AND TASERS

Although we may use the terms Stun gun and Taser interchangeably, they are not the same thing. A Taser shoots probes at your target, typically within a range of 15 to 30 feet. A stun gun has prongs that must make direct contact with your target.

What is a Taser?

A Taser is shot from a distance and is a form of electroshock weapon. A Taser shoots probes, which are connected to wires, toward your target. The probes, which are spear-shaped, penetrate clothing and sometimes skin, and emit an electrical current that can affect up to a two-inch area. Your target completes the circuit to deliver the electric shock.

What is a stun gun?

A stun gun has two or more prongs attached to it to deliver the electric shock. To use a stun gun you must be in direct contact with the person since it does not shoot out any type of probe. Typically, two of the prongs will have an electricity arc between them that you can physically see; the other prongs have the same voltage as these prongs but it won’t be visible. It can be dangerous to use a stun gun because the person who is trying to harm you may reach you before you can use the weapon. However, a stun gun may be more comfortable to use and more accessible than a Taser.

While stun gun and taser are both handy in self defence and may look like interchangeable terms. But they differ on various grounds.

How does Stun gun differs from tasers in term of Functionality

Stun guns are High-voltage, Low amperage devices whereas Tasers are High amperage, Low voltage devices. This could be understood as stun gun generate a high-voltage, low- amperage electric charges.  i.e. the charge has a lot of pressure behind it, but much lower intensity relatively, which gives tasers the edge. 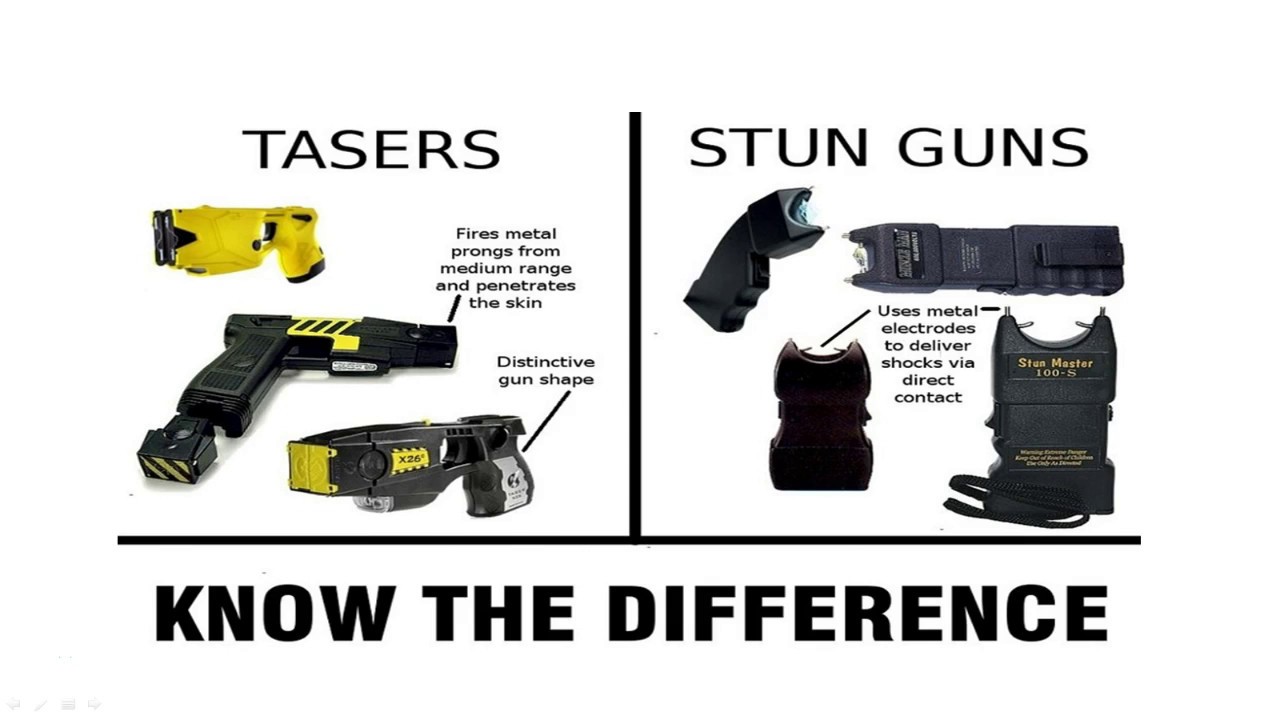 Difference between the effective range of stun gun and tasers :

The other major difference is the range over which they can be used.

A Taser can  shoot probes at the attacker, typically within a  distance range of 15-30 feet. while a stun gun has prongs that must come in direct contact with the target. so basically a stun gun is limited to close range, and is useful when attacker is in vicinity. where as tasers can be used against even if attacker is at a distance, which minimizes the risk and provides a window to flee and get help.

Difference in requirement of Maintenance for both the electric shocking weapons

Stun guns unlike tasers  does not not require any replacement of  firing cartridges, since most are rechargeable they are readily good to go, and furthermore they don’t  require a felony background check. Cost efficiency : stun guns are more cost effective than taser devices as stun guns cost less.

Is there any difference in legal permission for stun guns and tasers in India?

Yes, though the Indian Government allows to carry stun guns for self-defense purpose, it certainly doesn’t permit the use of tasers.

Please let us know if you have any further questions regarding stun guns and tasers. Our experts are there just for you!